When will I get a quote?

How long should it take to get a response to an RFQ? What are typical response times, and what's best-in-class?

So you’ve sent out an RFQ for a mission-critical part. Now what? How long will it take to get an answer, if one even comes at all? How long are you prepared to wait before you finally receive a no-quote?

In this post, we look at the data to get a sense of how long it'll be until you get a quote. Based on a dataset of 100,000 recent quotes, we look at the effects of time of day and priority on the response time [1].

When are most RFQs sent?

If we look at the eight-hour period with the most RFQs sent, we see that this is the standard nine-to-five work day for UTC-2. However, it’s safe to assume that most RFQs don’t originate in this time zone, as the only country residing in UTC-2 is South Georgia and the South Sandwich Islands. That is, unless sea lions are sending thousands of RFQs.

When are most quotes sent?

Similarly, the eight-hour period with the most quotes sent is in UTC-4, which is approaching standard working hours for the east coast in North America. For those in the United States and Canada, quotes are buzzing and flying around throughout the day.

How long does it take to get a quote?

Of all answered RFQs, about 1 in 3 are answered in the first hour. 83% are answered within a day. For many, this is good news, as they’re likely to receive a quote soon. On the other hand, if there’s no response within the first day, don’t lose hope. There’s still a chance of receiving a quote, leaving you in the 11% of those who get a response after two days. That said, you might consider sending a follow-up email after 24 hours.

Marking a request as “urgent” seems to have minimal impact on when you’ll get a response. Although requests marked as "Routine" have incrementally higher response time, there is no discernable trend as priority increases.

One explanation for this is that suppliers have come to ignore these labels. Another explanation may be that buyers and suppliers tend to pick up the phone and talk offline for true AOG requirements, so those are not well represented in this sample.

How long should it take to get a response?

Average response time dips as low as two hours and holds steady through the early part of the US East Coast working day. So early risers in Eastern Standard Time are lucky, as most of their workday also happens to be the best time to submit an RFQ.

Submitting just three hours outside this ideal time window doubles the average response time. And at the absolute worst time to submit an RFQ, response time increases by a factor of seven. When you require a mission-critical part, submitting in the right time window can make a huge difference.

How fast can the process go? The top 10% of suppliers can get a quote out in as little as 5 minutes once they work through the morning backlog.

Of course, this information is biased based on Rotabull’s network, which is weighted toward the Americas and Europe. Response times vary significantly based on buyer and seller time zone. However, based on this dataset, we can make some observations and suggestions:

Announcements
Wrapping up 2020: look how far we’ve come together

In 2020, in addition to laying the groundwork for future products, we shipped countless features that make sales faster and easier. Here's a roundup of the top ones.

Turn any RFQ into a quote in 20 seconds. If you receive an RFQ for an item that has been quoted in the last 90 days, you can reuse the past quote to auto-fill a new one with Smart Quote.

Read Post
Dec 10, 2020
Product
Updates
NEW: Multiple recipients and better follow-ups
Rotabull is taking off in 2020!
Pentagon, bulk follow-ups, and alternates!
View all Posts
Schedule a free product tour to see how you can sell more aircraft parts with Rotabull.
Schedule a Demo 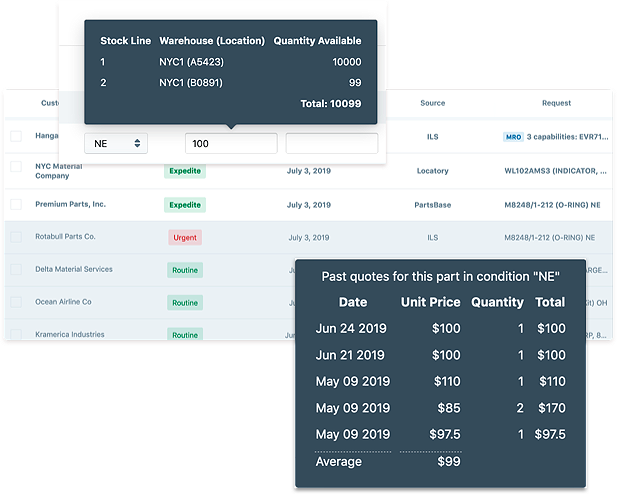